The following sections describe some common methods that can be used in an authentication system.

Passwords and PINs are most commonly used in a knowledge-based (“what the user knows”) authentication method. The longer the password, the stronger is the protection. A long password is sometimes called a pass-phrase. As a best practice for security, strong passwords that contain combinations of numbers, symbols and mixed cases should be enabled as far as possible in an authentication system. In order to protect the passwords (and other authentication information) during the course of transmission, the TLS feature, which can create an encrypted channel for data exchange, should also be enabled for the authentication systems.

Currently, most of the security attacks are targeting password-based authentication systems. Cases have been reported of user IDs and passwords being stolen by fraudsters through phishing emails, fake websites, Trojan software and other malicious software. Since such attacks focus on the end-user side, raising the awareness of users is very important so that they can protect their own interests in daily transactions.

Unusual knowledge-based methods can also be adopted based on visual images (graphical password). One example is that a user is presented with a series of five randomly generated life-like images and the user repeatedly picks out the images from a series of grids filled with more images. By picking the correct images, the user has actually typed in his/her password.

Public key infrastructure (PKI) is a management framework for enabling deployment of public key cryptography. Public-key cryptography provides an authentication method that uses a key pair, a private key and a public key. A private key is known to the user only and is never shared with any other servers or users. A public key is recognised by a public-key certificate issued by a Certification Authority and is available to any users or servers.

Public-key authentication can be implemented as a hardware or software token under different situations. As a soft token, the private key is stored in the keystore of the operating system or as an encrypted file in a data storage device. Some implementations will store the private key in a hard token (such as a smart card) and the possession of the token is mandatory in the authentication process. Since the private key cannot be exported from the hard token (i.e. there will only be one copy of the key), loss of the key can be more easily detected and remedied. The activation of the token will need the entry of a password or biometrics which can verify the legitimate user.

It should be noted that public-key solutions can also provide an additional security protection using “digital signature” for critical transactions. By digitally signing the submitted data, the integrity and non-repudiation aspects (in addition to authenticity) of the transaction can be ensured.

SMS is used as a delivery channel for a one-time password generated by information system. The user receives the password by reading the message in the mobile phone, and types back the password to complete the authentication. The unique identification of the SIM card effectively enables the mobile phone owner to possess an authentication token, which can be registered and used by different applications. SMS is an effective means for places where mobile phones are widely used in the community.

A slight variation of the symmetric-key implementation is the use of OTP tokens. Such OTP tokens use either a clock or counter, sometimes both, to generate the OTP with a symmetric key contained in the device. There are others that use a challenge-response system in which the token combines a random challenge from the authentication server with the shared secret key to generate the response, which is essentially the OTP. Since OTP will only be used once, it can protect the user against password guessing, eavesdropping and replay types of attacks.

When implemented together with the password authentication, this method also provides a possible solution for two-factor authentication systems, which is considered sufficient for applications that require Assurance Level 3. 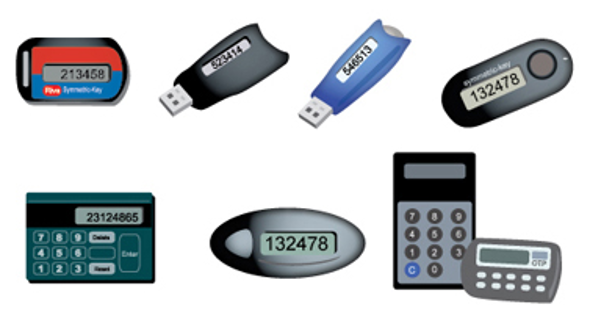 Biometrics is a method by which a person’s authentication information is generated by digitising measurements of a physiological or behavioural characteristic. Biometric authentication verifies a user’s claimed identity by comparing an encoded value with a stored value of the biometric characteristic concerned.

Common types of biometrics include: