Denial of service (DoS) and distributed denial of service (DDoS) attacks are among the most common cyber threats on the Internet. The mechanisms behind these attacks are more or less the same and they share the same evil goal of degrading the performance or exhausting resources of the target systems, rendering them unusable or inaccessible. Such targeted systems include websites, email services, Domain Name System (DNS) and web-based applications, etc.

DDoS attacks, on the other hand, are large-scale DoS attacks. The attacker will orchestrate a synchronised DoS attacks to target a specific service / network / server by remotely control a number of compromised hosts. Attackers may adopt common attack techniques like reflective amplification to upscale the attack and cause as much operational disruption as possible. According to a news report, an information technology service provider experienced a DDoS attack on DNS which caused service outage around the globe for several hours in April 2021. Some of the cloud services provided by the service provider became inaccessible. The incident shows that DDoS attacks can significantly affect the service of an organisation which may in turn result in potential loss. 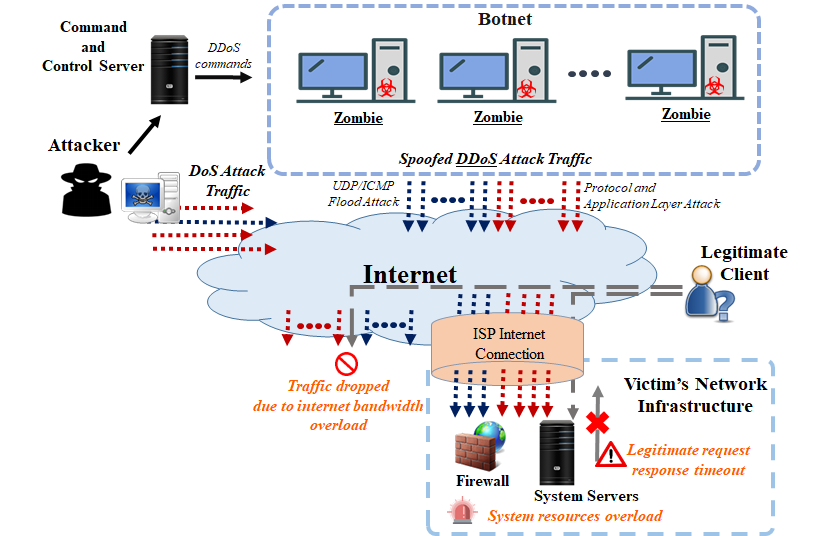 Moreover, DDoS attacks are sometimes used as a decoy to distract an organisation’s cyber security operations while other malicious activities, such as data theft or network infiltration, are underway.

For simplicity, DDoS is quoted to include DDoS and DoS in the subsequent sections.

The impact of a DDoS incident can be devastating to an organisation from both financial and operational perspectives. The consequences of a DDoS attack may include:

Service interruption – Computer systems overwhelmed with unusual traffic and system services become unavailable to users and customers (e.g. disrupted online sales services and loss of shareholders’ confidence).
Business operation interruption – DDoS attacks may affect the performance of the organisation’s computer network, degrading its performance or even bringing it to a halt (i.e. services level agreement breach).
Damage to organisation reputation – Unavailability of IT services may trigger customer complaints which will in turn damage the organisation’s reputation.
Financial loss – An attacker sends emails to the organisation demanding ransoms in exchange for the cancellation of DDoS attacks against the organisation.
Impeding cyber defence capabilities – An attacker uses DDoS as a decoy to distract attention of the IT security teams while trying to breach the security perimeter of the organisation’s system with malware attacks or network intrusion.
Typical DDoS Attacks

DDoS attacks can be broadly classified into the following four major categories:

Flood or volumetric attacks – Massive amount of packets delivered by attackers seek to consume all the available Internet bandwidth of an organisation and disrupt legitimate users’ traffic to make the system services inaccessible.

Connection state attacks (also known as protocol attacks) – Connection state resources located in network infrastructures and servers have to conform to the application protocol, which often involves protocol handshakes. These handshakes are designed to be coordinated connections which require the destination servers to respond to them. The attackers exploit the mechanism of the protocol handshakes by disguising as seemingly legitimate connections with the goal of exhausting the resources of the victim’s servers, generating traffic that is difficult to be mitigated by stateless firewall or edge router. The traffic created by these connections may eventually exhaust the victim’s system resources and prevent access by legitimate users. 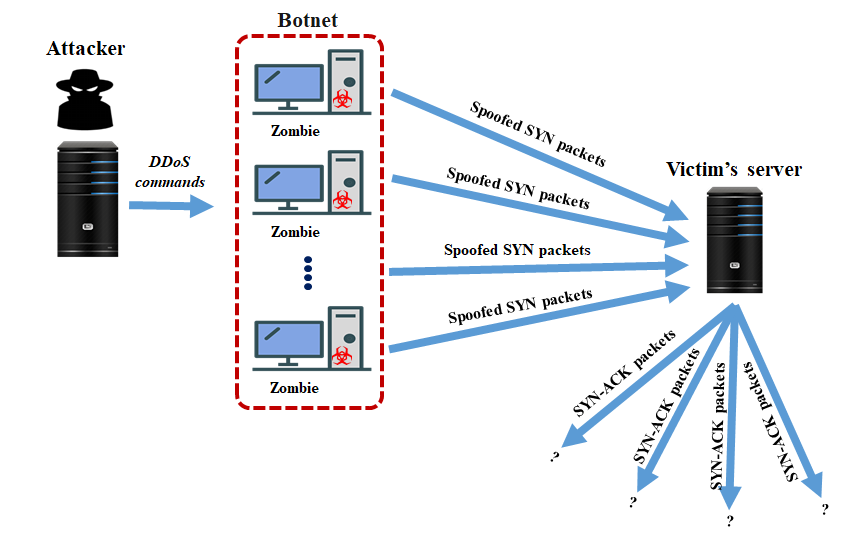 Application layer attacks – An attacker launches malicious activities which target the application layer of specific functions of an application. The victim’s application is overloaded with requests for resources, which exhaust all available resources and result in failure to respond to legitimate user requests.

Reflection and amplification attacks – An attacker leverages the UDP or Transmission Control Protocol (TCP) to send small spoofed requests to vulnerable open servers (also known as amplifiers) that request a large amount of data, which can be megabytes or gigabytes of traffic, to be sent to the IP address of DDoS’s target. The target needs to receive and response to the massive amount of network packets, which may result in server resource exhaustion and lead to denial of service. The followings are some best practices for organisations to protect against DDoS attacks.

Organisations should monitor the network traffic and usage of system resources regularly to detect traces of DDoS attacks so that they can take prompt action to contain the damages caused and eradicate the DDoS attacks.

Disclaimer: Users are also recommended to observe the disclaimer of this website and read the user agreements and privacy policies of the security software and tools before downloading and using them.