The Importance of Backup and Recovery

A backup is a representative copy of data at a specific time. The phrase "backup and recovery" usually refers to the transfer of copied files from one location to another, along with the various operations performed on those files.

A good backup strategy is essential for data security. Backup is the last defense against data loss, providing a way to restore original data. It has the following advantages:

Protecting you in the event of hardware failure, accidental deletions or disaster;
Protecting you against unauthorised changes made by an intruder;
Providing you with a history of an intruder's activities by looking through archived, older backups.

Backup & recovery consists of a cycle of iterative activities and processes that require ongoing monitoring and control. 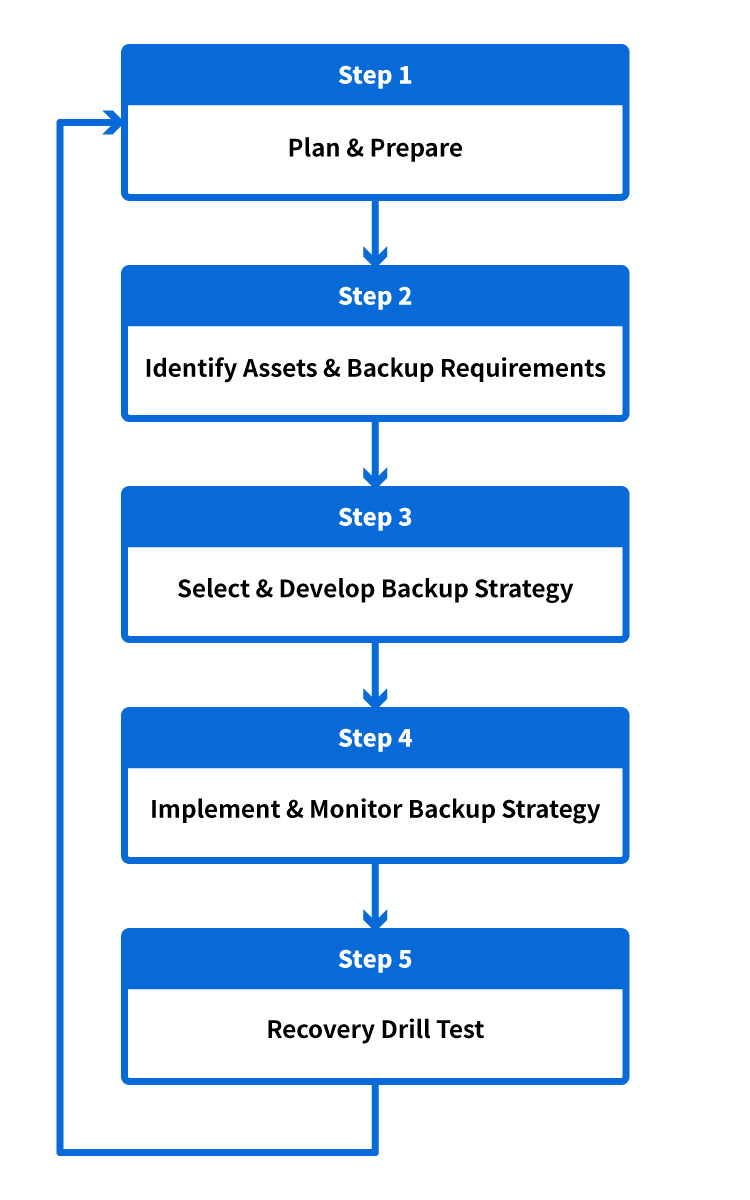 You have to plan & prepare beforehand to ensure that the backup process can be manageable. The following list shows the related activities:

Plan for backup in the system design stage.
Centralise the critical data on the secure server where it can be backed up effectively and efficiently.
Segregate the system files and data files on separate storage partitions or separate machines to make the backup much easier.
Design the recovery configuration according to your business continuity plan requirement.
Define the roles and responsibility of staff for backup and recovery e.g. a system administrator is responsible for centralised backup and reviewing of the centralised backup log while the system owners should perform backup whenever there is a system change
Establish and well document backup and recovery procedures. Wherever possible, their effectiveness in real-life situations should be tested thoroughly.
Prepare sufficient backup media and storage cabinet.
Step 2: Identify Assets & Backup Requirements

Prepare a list of information asset showing the detailed backup requirements. The list should include, but not limited to the following items:

the strategy options and;
the risks with the storage and handling of backup media.

Listed below are some common strategy options that you have to consider:

Risks with the Storage & Handling of Backup Media

In addition, you need to consider the potential risks with the storage and handling of backup media. Examples of risks are:

Environmental threats such as fire, water and dust
Corruption/damage of backup media
Leakage of confidential information and theft from the backup media
Production site is not accessible resulting in the unavailability of the backup media and recovery procedures

In order to mitigate these risks, you have to include some addition practices in your backup strategy. For example,

Tape - is one of the most commonly used medium for large organisation. Tape Magazine or Automatic Tape Changer may also be used if data volume is very large that span multiple tapes in one backup session.

Clean the tape drive's head regularly. The cleaning frequency depends on factors like the operating environment and operational (backup, restore, scan tape etc.) frequency. Some tape drives have indicators to remind user to clean its head after certain number of runs.
Properly store and maintain the backup media. The media should be properly labelled and placed in their protective boxes with the write-protect tab, if any, in the write-protect position. Keep them away from magnetic/electromagnetic fields and heat sources and follow the manufacturer's specifications for storage environment.

Recommend to use local server tape drive backup rather than backing up of multiple servers through the network as backing up through the network will be much slower and time consuming if the amount if data is very large.
Use differential backup during night time on week days and use full backup on Saturday night, when no one will be accessing the server.
Keep a tape for each month or any special occasion in a safe when documents need to be deleted every month.
Check logs of backup runs daily.
If time required for backing up the server is too long that exceeds the site's allowable backup time frame, data can be copied to a dedicated backup server and let the backup task run on the dedicated server. But the security level of the dedicated backup server should be the same as that of the production server to avoid unauthorised access.
Server backup software is operating system specific. Most backup software products also provide disaster recovery option for system recovery.

Use local backup device: workstation data can be backup as frequent as required. Users can take the active role for backing up the data or use a scheduler to backup data to local backup device (e.g. DVD/RW drive) at regular intervals.
Use workstation backup agent and central network backup: most server backup software products provide the function to backup data that reside on connected workstations. Workstation data can be backed up to the server backup device following the client backup schedule defined by the LAN administrator. But the workstation will have to leave powered on during the backup.
Use central network backup with vital data copied to server: workstation data can be copied to server and server will be backed up according to its regular backup schedule. Users can take the active role for copying data to the server. Or a scheduler can be used to copy data to server at regular intervals to match with the backup schedule on the server.
Step 4: Implement & Monitor Backup Strategy

The next step is to implement the defined backup strategy and the backup procedures. This includes activities such as:

purchase centralised backup systems/package that best suits your needs;
set up the backup job definition and schedule according to backup strategy;
print out the backup calendar and post in prominent place near the backup console;
get ready the backup media such as labelling them with correct cycle number and marking down the media expiry date; and
perform the backup job and keep a record of the backup activity.

To ensure the backup is successfully, you need to regularly monitor the backup activities:

review the backup log to verify the backup job can be completed successfully;
record down problems and follow-up; and
test periodically the backup media such as the magnetic tapes, diskettes or cartridges used for backup to ensure that they could be restored when needed.
Step 5: Recovery Drill Test

You must ensure that the backup strategy is useful with time and the backup can be recovered. The best way is to conduct a recovery drill test periodically. If there is no system change, you may do the test once a few months. But if there is a change, you should do the test immediately to ensure that the backup & recovery procedure has been revised in accordance to the system change. Review the backup procedure and technical configuration and recommend improvements. Implement the improvements by repeating the backup & recovery cycle.